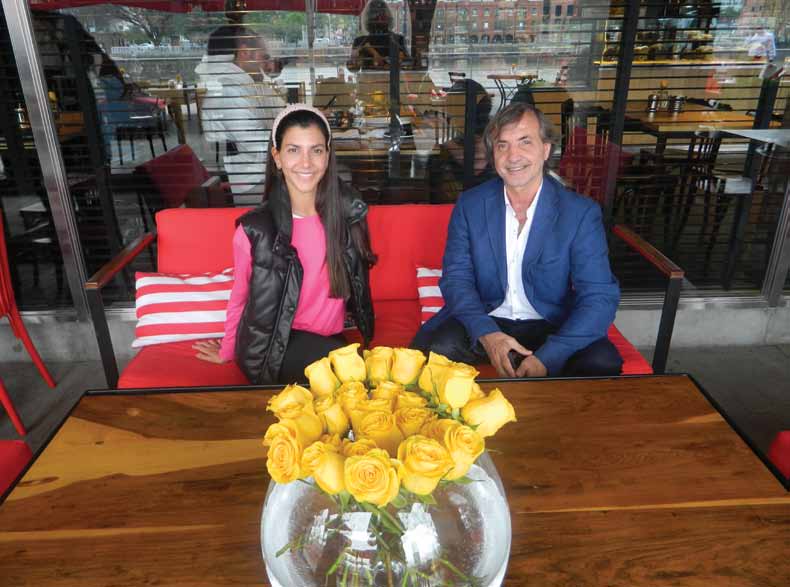 Fernando Guillemí and his daughter Alea, both partners at Guillemí Group, were specially invited by the IEES to present the conclusions of a project they started together several years ago, and which has no expiration date. The meeting that will take place on December 11 and 12 of this year in Barcelona, Spain, will bring together, as it has been doing since 2018, the best of Vertical Transport. In this edition, the presentations of representatives of the Lift Instituut, Efesme, Otis, Kone, and businessmen and consultants from India, Finland, Singapore, the Netherlands, Spain and Turkey, among others, will be heard. Guillemí Tec’s participation is the first of an Argentine company in this symposium.

Sponsored by the Lift Instituut – the Dutch certifier for escalators and elevators, and the American magazine Elevator World, the International Elevator and Escalator Symposium (IEES) offers the possibility of keeping the spirit of vertical transport up to date, as well as that of its industry and that of developers, architects and maintenance managers of all types of buildings. It is an annual event at an academic level, which brings together top experts at a global level, who present their research papers, their projects and new ideas on the most avant-garde topics of this activity.

The first edition of IEES was launched in 2018 in Istanbul, Turkey. Las Vegas, USA, was the destination for the 2019 event in which 20 presentations from different parts of the world were made. That event ended with panel discussions, which allowed for a very interesting series of brainstorming-style exchanges about elevators and escalators and how they are affected by inspections.

The edition of the IEES that will take place in Barcelona this end of the year will deal with “The future of elevators and escalators in 2030”. And there, as an exclusive speaker from Argentina, the young Alea Guillemí, bearer of a surname linked to a long tradition in the elevator manufacturing and maintenance industry, will speak for all those present.

Process of changes in Guillemí Group

Guillemí Group has carried out in recent years a reconversion of the company aimed at maximizing resources, to the production of a new type of green elevator, reducing time and costs. For this they have worked on their philosophical basis, which explains the fact that they have been selected and invited by the IEES to talk about Vertical Transportation in the year 2030. This is the first participation of an Argentine elevator company in such a high-profilemeeting. conceptual level.

After the young Alea joined the family business in 2016, Guillemí Group underwent a major transformation in its administrative and industrial processes.

Although Fernando Guillemí had already laid the foundations for a paradigm shift, it was the intervention of Alea, who studied Business Administration and later completed a Bachelor&#39;s Degree in Marketing, which promoted the automation of the commercial and industrial steps that come together in manufacturing and installation of elevators. In 2019, before the pandemic, she got into the accounting system and the own management system in which his father, Fernando, had already worked since 2009. It was a nice base to be expanded, due to its great flexibility. On a white board the width of the wall, he began writing everything down. And each process and each cost was exhaustively studied until SIGECON, acronym for Management and Control System, which consists of monitoring the Sales and Installations operation, is shaped, a system that does not stop growing and diversifying month by month, and that works as follows:

The seller makes the budget and that is later transformed into a contract that is generated by itself and has a digital signature; then it is sent by mail to the billing sector; there the work alone is generated with all the technical characteristics; Purchase orders are generated and sent to the supplier, all automatically, thus saving time and errors.

A person closely monitors the civil works, to see which one has the shaft ready and then claims that the installation can start. When everything is verified, it goes to the state of suitable installation and an automatic notice is sent with the plans so that work can begin on the elevator that will be delivered within a period of 15 days. With this, the stages that the assembler has to present to collect the work are generated. When the assembler passes the last photo of the work done, it automatically advances to pre-delivery; With this pre-delivery, it is validated that all the materials are delivered and the payment is made. Then a satisfaction survey is also sent automatically.

When the installation work is definitively finished, an estimate of the payment is also issued to the client. If the latter accepts it, a process similar to that of the sale is generated, that is, a contract that is generated only with the corresponding registration, automatically.

The process of organization and cost analysis was followed by a second stage of change, which is to have developed a type of &quot;disruptive&quot; elevator, as Fernando Guillemí describes it, due to the technology it uses, the mechanics and the modality, and also due to the approach side of the delivery and customer process. &quot;It is a system that, as can be seen, almost does not need labor in the entire process, both administratively and constructively.”

“We were able to manufacture a very compact 80 kg machine that sits in the aisle. We knew that the patent for the flat strap or belt that Otis invented in 1999 expired after 20 years, in 2019. In 2018, traveling around the world, we went to look for the belt and the machine” explains Fernando Guillemí.

As everyone knows, the Otis tape consists of wires laid side by side, covered with a thermoplastic. As they are 2.15mm in diameter they allow for a 86mm pulley. (the pulley must always have a diameter 40 times greater than the cable) instead of a 320mm one. for the classic 8 mm cables, and this results in a smaller motor. And if you add permanent magnet and gearless technology to this, the machine is smaller because it has magnets in the rotor. “In addition to being small and using this entire system, we decided with Alea to make standardized equipment that takes up very little space and can replace any other type of equipment. We have already installed about 60; We have it approved in CABA and in five municipalities and we are seeking to approve it in others. As of the new Building Code, they can be installed and the placement of the tape is also authorized”. They created a system with arcata and tape, a piece of equipment that according to the Guillemí family will replace the hydraulic elevator and will be in tune with environmental protection.

In this third stage is where Guillemí&’s production is connected with the theme that kept him awake years ago and for which both were specially invited by the IEEA to speak for the elevator of the year 2030. A liter of mineral oil used by hydraulics contaminates 1 million liters of water. 200 liters are used in each elevator. In Argentina, according to Guillemí, some 1,200 hydraulic elevators per year would be installed, which would imply 200,000 liters of oil that go around there, per year.

There is great concern about environmental pollution, and the growing consumption of natural resources and the increase in the carbon footprint. Right now China is developing a nuclear fusion reactor that is going to replace electric power and the use of carbon. It will consist of a concentrated star that will provide an enormous amount of energy. “We are concerned about the enormous contamination. We are precisely looking for an NGO to help us plant a tree for every lift sold”.

As a result of the numerous works published on the subject of the reconversion of the company and its ecological concept, Lift Instituut invited them to participate with their work in this annual IEES meeting, which was postponed from the end of December 2021 in Amsterdam, Netherlands, for December 2022 in Barcelona. “They asked us to send him an abstract, a kind of summary, which was accepted very quickly. Until October 4 we could present a paper that had to have 8 pages and we made one of 17 with the tables. Our presentation consists of 60 slides, videos and voice-over”.

Keys and an unknown in the presentation at the IEES

Excessive consumption is producing disasters in the world. In tune with the protection of the environment and in response to climate change, Guillemí Group aims with its manufacturing to reduce its carbon footprint. Together with Alea, they are going to approach the subject in a literal way. They will mainly focus on the following issues:

Is the largest carbon footprint generated by elevators due to the use of the equipment or is it caused by other aspects unrelated to the elevator itself?

Should we only be concerned with the carbon footprint or could it also be that we need to eliminate as much as possible the pollution produced by some types of elevators?

Could we do something to improve, even a little, the efficiency of human resources and the sustainable manufacturing of equipment?

The first question has to do with the use of electrical energy for the elevator. It causes a carbon footprint because that energy is produced with an Argentine generation matrix. The Argentine matrix has hydraulic, atomic, thermal, wind, and solar energy. But in Argentina, a lot of thermal energy is used, which is what produces carbon dioxide when burning fuel oil to generate steam and with it move the turbines. The other energies listed generate less carbon.

In the Argentine matrix, half a kilo of CO2 is generated per kilowatt consumed.

The account is made based on the kilos that the elevator consumes to know how much emission we make per day, indirectly.

The Guillemís did a study where they noticed that the emission caused by vertical transport in its operation is very low. They came to the conclusion that the carbon footprint generated by the elevator sector is 8 times higher but due to another reason, which is not directly related to elevators, but is related to them and is what they will reveal in his presentation at the IEES, next December 13 at 1:55 p.m.

What did you do during the pandemic mom?
One of the things for which Alea was able to devote so much and so well to developing and expanding this operating system had to do, paradoxically, with the pandemic. In that period when time stood still and people isolated themselves, Alea worked hard from London, UK, where he was at the time, to modernize the system. It was 6 months of getting up early and working full time. “I wake up very early, my hobby is working. At 7 in the morning in London, in Buenos Aires it was 3, and you couldn’t talk. So I took advantage of those moments of silence and sat down with the computer and entered the system and did tests and things occurred to me, and sent emails, completely focused on work. When one day her children ask her where she was and what she did during the pandemic,
Alea will be able to tell them that she was building a company for the future.

We manufacture a truly “disruptive” elevator, due to the technology that drives it , the mechanics and the modality, and also, due to the lateral approach to the delivery process and customers. It is a system that almost does not need labor in the entire process, both administratively and constructively”.