Going Up? Not So Fast: Strict New Rules to Govern Elevator Culture

Small, crowded, enclosed spaces are petri dishes for the coronavirus. But in urban office buildings, elevators are a necessity, so companies are wrestling with how to make them safer. 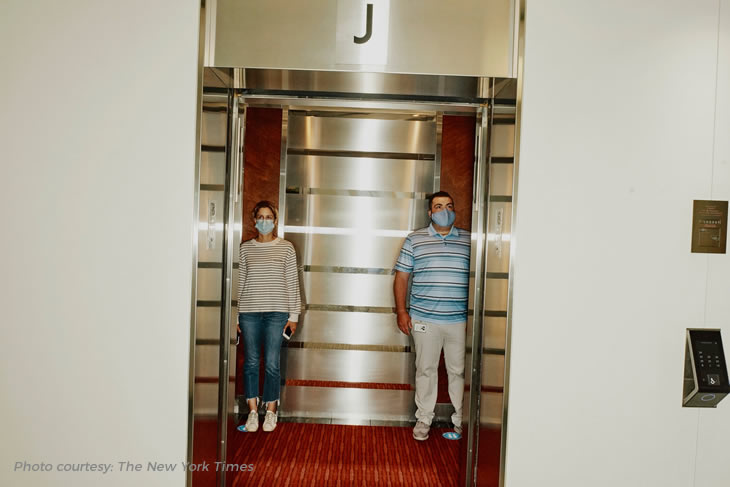 Two employees of Boston Properties demonstrated proper safe distancing in an elevator at the Prudential Center in Boston.
Credit: Tony Luong for The New York Times

Kiss the elevator pitch goodbye — at least if it takes place in an elevator.

Change is coming to the daily vertical commute, as workers begin to return to tall office buildings in New York and other cities. The elevator ride, a previously unremarkable 90 or so seconds, has become a daunting puzzler in the calculus of how to bring people back to work safely after the coronavirus pandemic kept them home for months.

Employers and building managers are drafting strict rules for going up: severe limits on the number of riders (four seems to be the new magic number), designated standing spots to maximize social distance, mandatory masks, required forward-facing positions — and no talking.

Some companies are hiring “elevator consultants” to figure how best to get thousands of people to their desks, balancing risk of elevator density against a potential logjam as riders wait — at least six feet apart — for their turn.

Reflecting the widespread interest and concern, the Centers for Disease Control and Prevention plans to weigh in as early as next week with guidance for elevators and escalators. For escalators, it will advise one rider every other step and hand sanitizer at the top. For elevators, it will recommend limiting the number of riders but won’t specify a number; arrows showing different paths to get on and get off; masks; and signs urging people to “not talk unless you have to,” said Nancy Clark Burton, a senior industrial hygienist at the C.D.C. who is part of the group developing the new guidance.

The changes are the result of clear science. Covid-19 is most transmittable when people are in tight confines, particularly indoor settings, where invisible droplets can travel from one person to the next, collateral damage of a seemingly innocuous conversation.

“The good news is: If you don’t like small talk in the elevator, those days are over,” said Jonathan Woloshin, head of U.S. real estate at UBS Global Wealth Management’s chief investment office, who has spoken to executives from major companies rethinking elevator policy and technology, including the eventual use of elevators called by voice command or app. 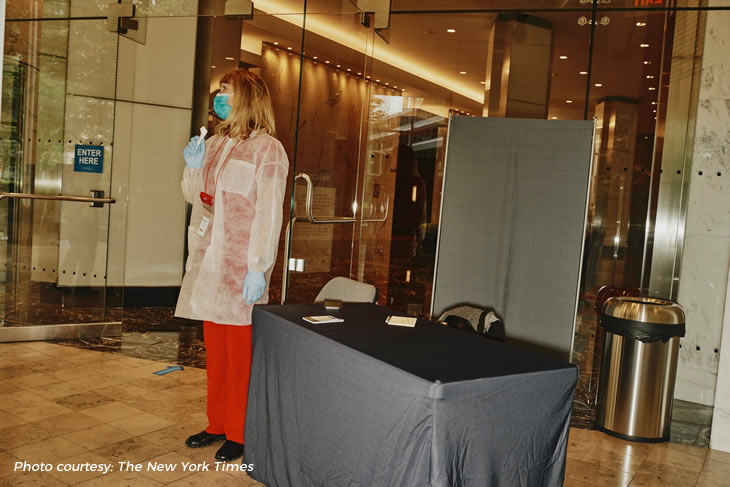 Visitors and employees receive a temperature check before entering the elevator bank at the Prudential Center.
Credit: Tony Luong for The New York Times

Richard Corsi, dean of engineering and computer science at Portland State University, has calculated how much virus would remain in an elevator if an infected person rode 10 floors, coughing once and talking on a smartphone. After exiting the elevator — an act that released some of that person’s emissions from the elevator — approximately 25 percent of the person’s discharge would remain by the time the empty elevator returned to the first floor, he estimated.

Given all the unknowns with the coronavirus — like how much is needed to cause illness and how much of the aerosol would spread to another rider’s lungs — Dr. Corsi couldn’t determine the likelihood of transmission. But he said that the excretion from an infected person not wearing a mask would make an elevator far riskier than, say, standing in much less confined space, for the same amount of time, even indoors — “100 to 1,000 times more particles per liter of air,” he estimated.

“Standing as far as way as you can diagonally in elevator would be good, and do not speak,” he said.

“That needs to be part of new etiquette,” he added. “They should put big signs on the elevator: Do Not Speak.”

Part of the challenge is that commercial elevator dimensions, while they vary, aren’t built for social distancing; to meet most state standards, an elevator should be 51 inches deep and 68 inches wide (4 feet 3 inches by roughly 5 feet 8 inches), according to Stanley Elevator Company. Even many larger elevators won’t leave riders six feet apart.

“More like three to four feet,” said Douglas Linde, president of Boston Properties, which owns such landmark buildings as the Prudential Tower in Boston, General Motors Building in New York City and Salesforce Tower in San Francisco. “But, again, you have a mask on and you’re not speaking to each other.” 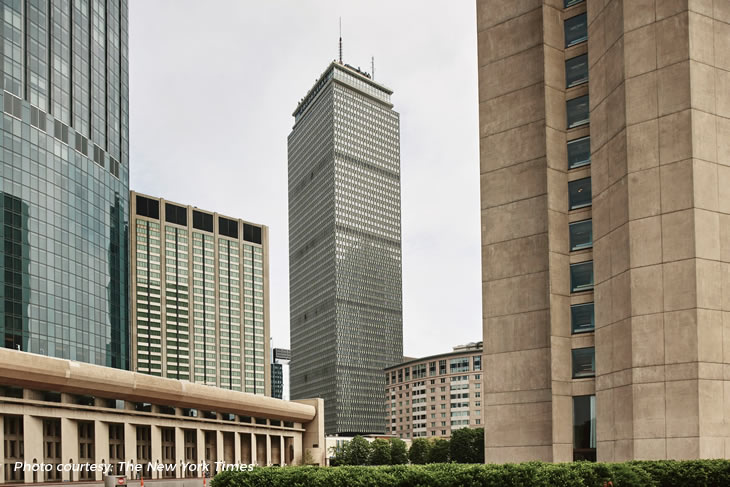 The verticality of tall buildings poses special problems in the age of coronavirus as offices explore reopening.
Credit: Tony Luong for The New York Times

Mr. Linde said Boston Properties retained consulting services from Joseph Allen, a Harvard University assistant professor, who specializes in indoor environmental quality, and experts in managing elevator traffic. They helped work out a math problem: What should the limit on elevator capacity be so as not to create a traffic jam in the lobby for those waiting to ride?

The consultants figured four could be a reliable limit even in the tallest buildings, so long as total building occupancy remained below 60 percent. Otherwise, people will have to wait too long.

Mr. Linde said that assuming less than 60 percent occupancy seemed reasonable, given that some cities weren’t allowing full occupancy in buildings yet and that many companies continued to allow or encourage working from home.

But some companies are taking issue with the limits on the number of riders, arguing that they test patience and promise more safety than can be guaranteed.

“I can’t give you the six feet in an elevator — you’d have to have someone on the ceiling and someone on the floor,” said Andrew Hardy, head of operations at JEMB Realty, a privately held company that owns and operates residential and commercial properties, including Resorts Casino Hotel in Atlantic City, a retail space in Herald Square and a 33-story commercial building in the financial district in New York.

“Our sign is going to say, ‘When riding elevators we recommend using your best judgment,’” Mr. Hardy said. “If an elevator comes and two or three people are in it and you feel comfortable, you’ll get in, and if you don’t feel comfortable, wait for the next one.”

“If I put two circles in an elevator and four people get in, what am I going to do, arrest these people?”

The campaign to make the elevator safe reflects in part the new economic reality of commercial real estate, which has seen its fortunes flipped by the coronavirus. Many companies are reviewing whether they need pricey downtown offices if employees can work from home, so landlords are working to make their buildings feel as safe and welcoming as possible. 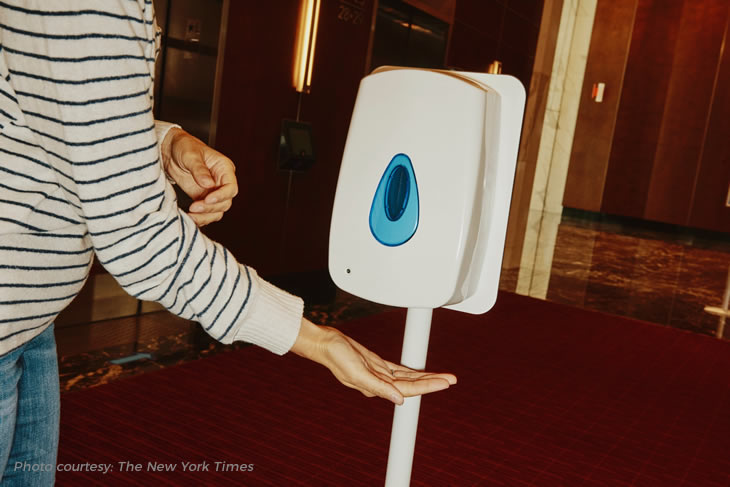 JEMB Realty is building a new commercial high-rise in Brooklyn that will have new elevator technology: a key card or fob that allows tenants through a turnstile and automatically calls an elevator to take them to their floors. Mr. Hardy said that technology was planned before Covid-19, but others said the touchless elevator would become much more common now.

There’s only so much, though, that can be done with elevators. Some buildings are opening stairwells, including those run by CBRE, one of the world’s largest commercial real estate operators. Some are asking tenants to stagger employee start times.

“Imagine if you have a 30-story office building in New York City and you’re trying to get 5,000 people in between 7 and 9 in the morning,” said Brian Jennings, CBRE’s managing director of business operations in the Americas, who said elevator safety ranked as a top five concern among clients.

Other ideas include better air ventilation, use of ultraviolet lighting to kill germs, and antimicrobial surfaces, said Prof. Lee Gray, an elevator historian from the University of North Carolina at Charlotte and correspondent for Elevator World Magazine. He said the density in elevators hadn’t face such a challenge since 1918, when elevators weren’t touched by riders at all but by an attendant.

Today, the challenge is more widespread.

“I can’t think of any thing comparable to this,” he said. “This is the world’s smallest room and I don’t want to be in there with someone else.” 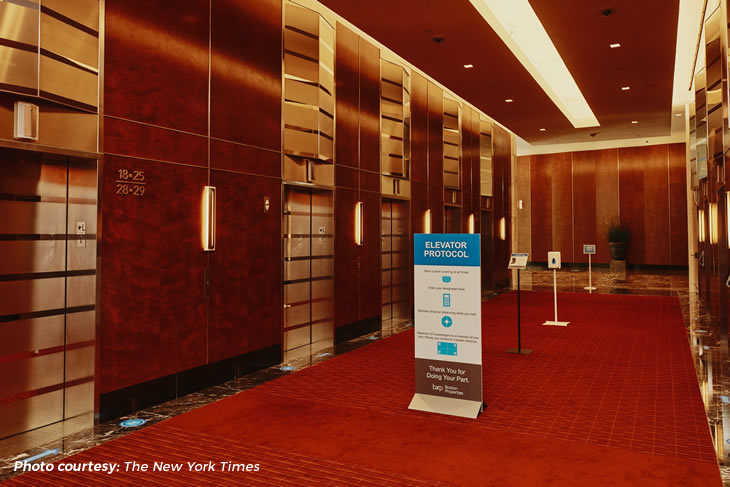