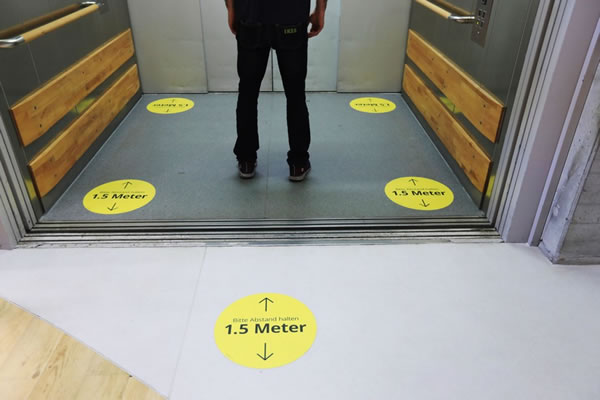 Fear of crowds in small spaces in the pandemic is spurring new norms and technological changes for the people-moving machines that make skyscrapers possible.

Of the many stressful spaces in a coronavirus-stricken city, elevators are among the most fraught. All but the fanciest require touching germy surfaces to operate and present the risk of other people squeezing in at any time. Even empty cars can harbor Covid-19 pathogens: A recent model of a hypothetical elevator ride showed that viral droplets can linger in the air well after an infected person exits.

Months into the coronavirus pandemic, building managers, health experts and high-rise dwellers have charted new codes of elevator etiquette and hygiene; as office workers trickle back to work, plans to get people up and down safely are being put in place. Yet the ubiquity and variety of vertical transportation systems means that new elevator norms and products aren’t possible for everyone to adopt. Invented for convenience and utterly mundane mere months ago, elevators now stand out as anxiety boxes that encapsulate all manner of social issues in cities.

“Elevators are the epicenter of urban density,” said Andreas Bernard, a professor of cultural studies at Germany’s Leuphana University and the author of Lifted: A Cultural History of Elevators. “They’ve always been the site where anonymity and intimacy come together in a unique way.”

First, a history. Without elevators, there would be no tall buildings. New York’s skyscraper boom followed swiftly after the first successful passenger lift ride in Manhattan in 1857, and other world cities would take its lead. With roughly 18 million elevators now running (or stalled) in cities around the world, the biggest structural height constraint in today’s supertalls is not the weight of steel but the weight of elevator cables, which is why some manufacturers are exploring horizontal elevators to eliminate rope strain.

As enablers of modern-day urbanism, elevators have long been windows into the sociology of crowds. The questions dogging today’s vertical travelers about safe and proper usage were also hashed out in the early days of the technology, Bernard said. Nineteenth-century newspapers debated the difficult question of how strangers ought to arrange themselves in such sardine-like proximity, and recommended riders choreograph themselves according to the number of people aboard. Relatedly, a lack of capacity limits meant that cars could drop suddenly if too many bodies stepped on. “Why should there not be a minimum number to get into an elevator and no more?” a New York rider spooked by such an experience wrote in 1912. She suggested that elevator attendants help regulate cabin crowding, along with operating the machine; a few years later, the first standardized weight limits arrived in the U.S.

The lengthiest of early elevator dilemmas, though, seems to have been whether should a man remove his hat when sharing a lift with a lady. On this topic the New York Times regularly published opinions, articles, and satire from the 1880s well into the 1920s. At stake was not only the practicality of hat-doffing in general but also the peculiar space of elevator itself: Was it more like a waiting room or a subway car? In the end, social arbiters decided the elevator was a means of conveyance, which meant heads could stay covered. (Still, as Don Draper once demonstrated, the matter might not have been fully settled by the 1960s.)
Yet that debate pointed to a broader question as relevant today as then: In the close quarters of a semi-public space, what behavior should people display and expect of one another? By the 1970s, the urban sociologist Erving Goffman found that most elevator riders simply followed a silent code of mutual disinterest, an enduring form of “civil inattention,” to use Goffman’s catchy term.

More recent research has delved into where people stand and how office workers tend to arrange themselves by gender and professional seniority.
Now, elevators are again sites of heightened social policing, like so many other spaces and routines that most of us once took for granted. As millions of people grapple with the health risks of “going up,” high-rise dwellers are using toothpicks, lighters, and their custom-filed fingernails to avoid contact with buttons. On social media, new norms and behaviors are being documented and discussed. “You can’t social distance in a cube,” complained one Twitter user. One recent Instagram post shows a cozy elevator interior with a set of floor stickers directing riders to face in four different directions. “If this is the future of elevator etiquette, then baby, I’ll take the stairs,” reads the caption.

Others vent about others’ lack of social hygiene and share tales of elevator-coronavirus crossover horror, like the one about a woman accused of pepper-spraying fellow shoppers who dared enter her elevator at Walmart, or a man caught spitting on the buttons of his condo building. No surprise that the first coronavirus-themed horror movie is set in an elevator.

But while elevators might look like disease traps, experts say the chances of getting sick on an empty one are probably low. Richard Corsi, the dean of engineering and computer science at Portland State University and indoor air specialist who ran the aforementioned model of elevator droplets, said that those covert particles probably wouldn’t pack enough virus to sicken a second passenger. “I think there are greater risks,” he said, listing workplaces, restaurants, mass transit systems and other places where people tend to spend longer periods of time, and breathe more potentially infected air, than the few minutes it might take to go up and down between floors. It’s unclear how many cases of Covid-19 have been directly linked to elevator rides, outside of one in South Korea.

Still, a long elevator ride shared with someone else could present a bigger risk. Even if they’re not coughing, that person might be an asymptomatic carrier and would still expel aerosols by breathing or talking, Corsi said. Hence, experts say to use pandemic-appropriate common sense when navigating elevators: Feel free to use a tissue or elbow to press buttons and other shared surfaces. Don’t touch your face afterwards and wash your hands once you reach your destination.

More specific advice includes avoiding elevators with other people on board, and to always wear a mask while inside, both for personal protection from any free-floating droplets and to protect the next rider from your own germs. “Buildings should have a policy of wearing masks and big signs posted to elevators: Wear a mask,” Corsi said. And given the invisible byproducts of flapping mouths, perhaps the informal norm of awkward silence while en route should be made formal, as in some buildings in Korea.

Similarly, if you must ride with other people, don’t unless they’re all wearing masks. Get off if mask-free riders insist on boarding, or support this Twitter user in overturning longstanding elevator etiquette: “Most Larry David-esque change in this new Covid normal is that it is now perfectly acceptable to close the elevator doors in other people’s faces when you are the only person in the elevator”.

Elevator manufacturers are meanwhile eager to sell property managers a bounty of new upgrades and services, including kick buttons, ventilation units, UV disinfection systems, and touch-free technologies galore. New “smart” elevator systems can help managers stagger elevator usage, monitor traffic, and charter express rides to particular floors for employees before they even enter the bank, said Jon Clarine, the head of digital services at Thyssenkrupp Elevator. Some of these technologies are already in use: Many hospitals use UV disinfectants inside their elevators, Clarine said, and “destination dispatch” elevators have been a feature of recent top-tier office and residential towers, such as Hudson Yards.

Such digital upgrades are likely to become more common as elevators are built and modernized with social distancing in mind, said Karen Penafiel, the executive director of the National Elevator Industry, Inc., a trade group. “What the building of the future might be post-coronavirus, I don’t know,” she said. “But I don’t think elevators will get much larger because they take up such valuable floor space”.

As for whether an elevator slowdown is in the offing, whether due to economic downturns, people working from home, or fears of urban density, it’s still too early to say: Barron’s reported earlier this month that while demand for new commercial elevators might slump in parts of the world, reduced elevator capacity due to social distancing could mean more elevator trips overall — and therefore more sales. One sign that lift trips are here to stay: Share prices for Otis Worldwide, one of the world’s largest elevator manufacturers, have risen since the company made its stock market debut in April, after being spun out from its corporate parent.

But while Wall Street might bet on high-end design improvements and services for the industry’s near future, those kinds of upgrades aren’t necessarily bound for every building. Witness the chronic elevator problems in New York City’s public housing blocks, where the coronavirus death rate among residents is more than twice that of the city at large. During the pandemic, broken lifts in some buildings have forced people into the stairwells or left them trapped, and extended outages have rendered social distancing a laughable fantasy. When only one elevator is functioning, tired residents inevitably crowd aboard. In particular, individuals with disabilities may have no other option.

“All these issues are important. They were important before this started, but they are much more important now,” a lawyer for a tenant’s group suing the New York City housing authority told The City in April. “Things that were an inconvenience for most people, people can be forced to wait [for elevators], now we’re in a whole other world where it’s actually a risk to life”.

This is telling. Some early reports blamed the rapid spread of coronavirus in New York and other big cities on high population density, or the large number of people in every square mile — a social structure made possible by elevators. At first glance, these city-making machines look like an easy metaphor for the inherent curse of urban life.

But that theory was incorrect, and so is the analogy. Experts now know that crowding, not density, is the urban health problem at hand. Elevators are a window into the difference: Imagine a luxury skyscraper that houses hundreds of residents within a small number of square feet. Thanks to high-speed, contact-free elevators, many of those people won’t ever risk infection; they can ascend to their cloud-like abodes without coming into contact with anybody. Not so for many low-income residents of NYCHA — who, in addition to dealing with broken elevators, may also be more likely to be heading to work, riding trains, and sharing poorly ventilated homes with other people.

“Those are the environments we should be paying attention to,” Corsi said. Or, metaphorically speaking, the elevators that ought to be fixed, first.