The elevator battle in Spanish skyscrapers

Schindler, Thyssenkrupp, Zardoya Otis or Kone dispute the most emblematic buildings in Spain. They are an opportunity to deploy technologies in a leading country on this transport. 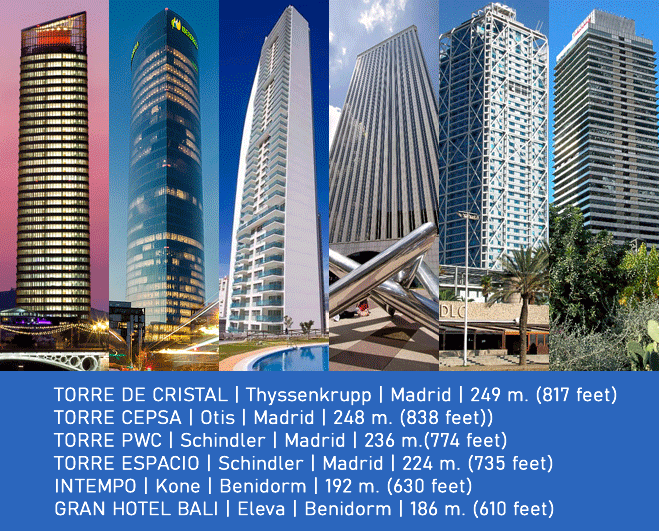 Spain is a world leader in elevators. It has 1.1 million of them and leads by far the European ranking of elevators per person. There are 19.8 per 1.000 inhabitants, according to a study by Credit Suisse and Eurostat, well above just 10 on average in the continent. The cause is that the Spaniards are the most used Europeans to live in flats. And in the country of elevators, the skyscraper is king. Multinationals such as Schindler (Switzerland), Thyssenkrupp (Germany), Otis (USA) and Kone (Finland) struggle to equip the tallest buildings in Spain and deploy their value-added technologies. They know that their best showcase is in machines capable of ascending to heights of hundreds of meters.

The elevator business has the wind in favor. According to Thyssenkrupp, this industry generates about 44.000 million dollars (35.600 million euros) per year worldwide. It is responsible for moving about 1.000 million people daily, and it does so with the pride of being the safest and cleanest “means of transport.” If it is in luck, is because one of the great trends of our time is the progressive concentration of population in cities. Every day an area the size of Manhattan is urbanized in the world; the number of skyscrapers has tripled since 2000 and in the next decades its average height will go from 300 to 600 meters.

And in Spain? Here the elevator companies experienced a real boom in the years before the crisis, in the heat of the housing bubble. Now the business has changed. Less construction is built, but homes are also rehabilitated and, above all, maintenance services are offered to a huge elevator park. There is an additional niche for the design and architectural challenges of historic or author buildings.

The 21st century has also been the one of the construction of the country’s great skyscrapers. The Four Towers opened in Madrid in 2008 and they were followed by the Sevilla Tower and the Iberdrola Tower, in Bilbao. The next to arrive will be the Tower Caleido, which with its 180 meters will be the eighth tallest building in Spain, and the three skyscrapers that are built in Madrid Nuevo Norte, also in the capital. One of them is called to become the tallest in Spain.

In this race for height the elevator manufacturers do not want to be left behind. The Swiss Schindler is a leader in terms of presence in the tallest buildings. Among the top ten, he equips Madrid’s PwC and Espacio towers, Seville, Iberdrola in Bilbao and Lugarno in Benidorm. It also puts the elevators of the Europa Tower, the Moncloa Lighthouse, the Ministry of Industry, Torres Blancas, the Torres Colón (all of them are in Madrid), the Colón Building, the Núnez and Navarro Tower and Millenium (in Barcelona).

The company managed in Spain by José Manuel Nieto billed 340 million in 2018 – worldwide it reaches 9,600 million – 20% more than in the previous year. He did it between small business purchases and margin improvements. Digitization allows it to advance in efficiency, urban planning broadens its business and the aging of the population opens a new niche equipping single-family homes.

Thyssenkrupp declared revenues of 355 million euros in Spain in 2018. The country is its fifth worldwide market and hosts one of its great research centers in Asturias. In Spain, it deploys technologies such as Max, launched with Microsoft for predictive maintenance with big data of elevators and escalators. It also offers solutions such as Twin -a lift with two cabins, one above and one below, which allows to move more people at the same time- or Multi -which has no cables and can also be moved horizontally-.

The German multinational is proud to have manufactured the elevators of the tallest building in Spain, the Crystal Tower, owned by Mutua Madrileña, with 249 meters and 50 floors. It is also present in two emblematic buildings in Barcelona: the Arts Tower and the Glòries Tower.

Schindler leads the classification of skyscrapers and Thyssenkrupp puts the elevators of the tallest building, but the real leader of this sector in Spain is Zardoya Otis. The company run by Bernardo Calleja is the one with the most elevators in Spain, with 240.000 units, and also the one with the highest income, with 784 million euros in 2018. With an investment of the US multinational, which represents a 50.01% of the capital, and of the Zardoya family, which owns another 11.6%, it is also a long-distance listed company, to the point of receiving the nickname of the “stock market value of the widows” because of the reliability and recurrence of their dividend. 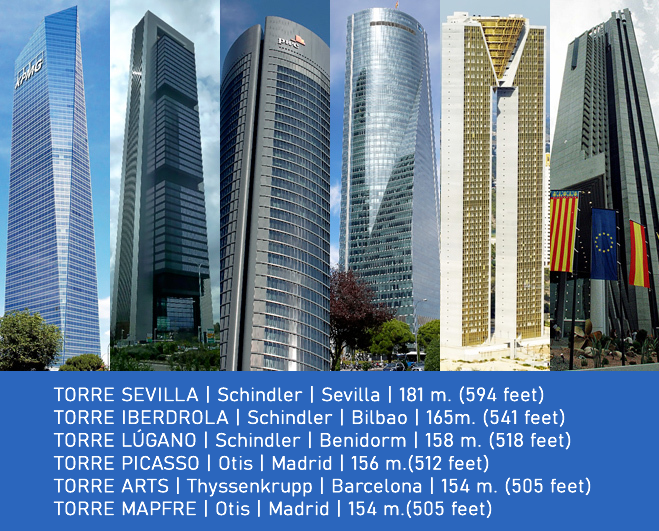 Otis is the manufacturer of the elevators of the Cepsa Tower, which is the second highest in Spain, only one meter less than the Crystal Tower. This building, designed by Norman Foster and currently owned by Amancio Ortega, has instead greater architectural quality and offers more interesting challenges for elevator operators. Its elevators are located outside the structure and make the complete route between the exit and the arrival floor. In other skyscrapers it is necessary to transfer.

The company also takes care of the 26 elevators of another iconic building in Madrid, the Picasso Tower, also owned by the owner of Inditex, and the Barcelona Mapfre Tower.

Another of the major elevator manufacturers in Spain is the Basque cooperative Orona, which last year reached revenues of 741 million euros and works on a plan to exceed 900 million in 2022. It has a presence in 14 countries and employs 8.000 people.

Orona is the manufacturer of the elevators of the Neguri Gane building, in Benidorm, of 148 meters and the thirteenth highest in Spain. The tallest building in the Valencian city, the Gran Hotel Bali, is equipped by the Eleva Company.

The Finnish Kone is another relevant actor in Spain, although quite distanced from the four industry leaders. Kone billed 96 million euros in the country in the last year of which there are accounts in the commercial register, 2017, and has placed its elevators in the ranking of the largest buildings in Spain through the Intempo Tower, in Benidorm.

This company has also been awarded the elevators of the ‘future’ Torre Caleido, which are built in Madrid by Inmobiliaria Espacio and MegaWorld, belonging to the Philippine tycoon Andrew Tan. The fifth north tower of the Paseo de la Castellana will have 46 elevators of the Finnish company.

The trade sector association, the Spanish Business Federation of Elevators (Feeda), estimates that in 2018 almost 15,000 new elevators were installed in Spain, 1.3% more than in the previous year. Spain is the European leader in the sector.

Excessive speed in the Cepsa Tower

The elevator is a place of light talk and also a sign of modernity. Many things go from the old elevators to the current ones, including a change of mindset. The claustrophobic elevators seem to be surpassed, such as the one that connects nonstop through the first floor to the  14th in the Genoa Financial Club of Madrid, or those that, like that of the former headquarters of the employers association of Unesa power company, included an ashtray. Now the machines are quiet, bright and digital. And, in some cases, authentic state-of-the-art wonders faced with complex problems. An example of this are the elevators of the Cepsa Tower, installed outside the building. At first, an employee of the building says, they moved at nine meters per second, but users complained of earache and the speed had to be moderated at seven meters per second. In the nearby tower, that of Cristal, it is necessary to make a transfer on the 34th floor. As a consolation, some screens inform the meteorological part – the subject of conversation par excellence in an elevator – and the news. Of course, going down to smoke a cigarette like those that were once possible to hurry in Unesa’s elevators takes time. The algorithms are imposed to manage the traffic of people in skyscrapers. In some cases, the user presses the number of the plant he wants to go to and a screen directs him to one of the elevators in the lobby. The solutions are varied and go through connected and intelligent elevators. The challenge is to avoid traffic jams in buildings through which thousands of people circulate daily.