H. Trimarchi: The Emporium of the Elevator 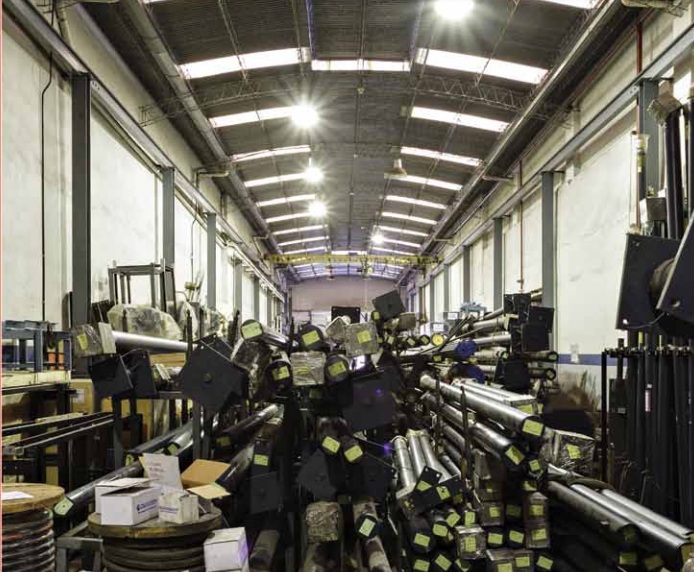 Created in 1981, the firm H.Trimarchi S.R.L. is one of the leading companies in the distribution of all kind of components for the elevator, such as spare parts of all brands installed in our country and kits for new installations. 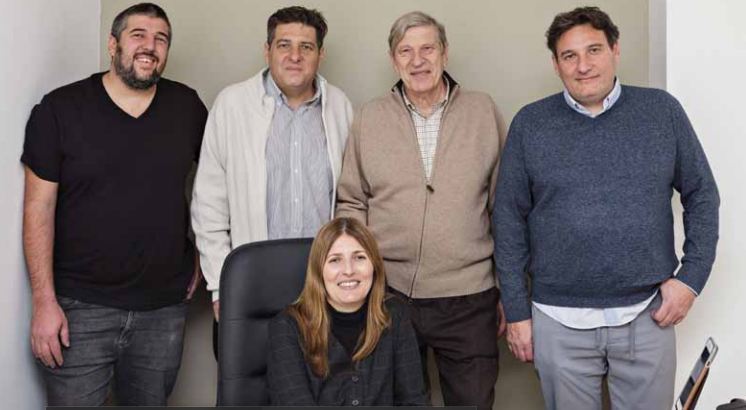 The Trimarchis from left to right: Germán, Leonardo, Sabrina, Héctor and Mauro.

Luppi Street in the neighborhood of Nueva Pompeya, Buenos Aires city, saw the growth of this family business, where four of the five Héctor Trimarchi’s children work, as they were incorporated to the firm as soon as they graduated from high school. In order from eldest to youngest they are: Leonardo Trimarchi, who has a degree in Business Administration like his father and is in charge of the direction and administration; Sabrina, who has a degree in Psychology and is in charge of the treasury and finance; Mauro, who is an architect and is risponsble to take on new equipment and perform new projects designs; and finally Germán, the youngest, in charge of the purchases.

Héctor Trimarchi started in the industry in 1969 when he joined Electra Elevators where, as he says, he learned about all the working areas but the personnel office. While studying his career at the University, he worked in production control and learned all about quotation and purchases. Having all this knowledge about the manufacturing process was what allowed him to take advantage of the great opportunity the economic crisis brought to him, during Martínez de Hoz’s management. Many major companies went on bankrupt in the late 70’s. They had to lower their blinds, among them, Electra, a company of 400 employees. And so with the help of an engineer and two installers of the same company, he provided material to install a huge number of elevators that had been pending completion. As Héctor himself claims, in Electra” I learned everything that had to be done and also what should not be done”, to become today the owner of a company that always keeps on progressing. 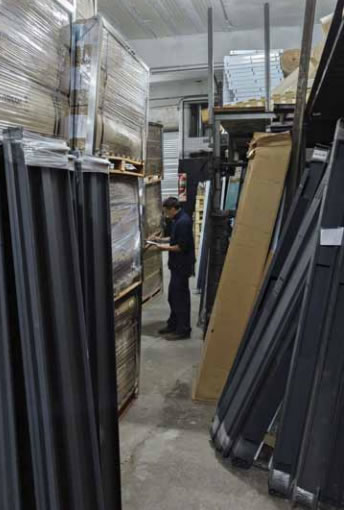 That was the way, little by little, how H. Trimarchi went from a former shop in front of the San Lorenzo field to his first establishment on Luppi Street, where there was concentrated the storehouse and expedition activities as well as the administration one. Later on the company grew and was distributed in several places, almost all in the same block. In one of these places are stored all components for new installations, another one houses everything for the automatic doors and a third one is designated for the spare parts retail and for the administration offices on the upper floor. In addition a medium plant, four blocks away from the headquarters, on Echauri Street, houses the factory where Trimarchi manufactures cabins and all kind of frames, to avoid a long trip to their clients, they also have a retail store on Frías Street, very close to the Parque Centenario area in the city center.

The growth of the business has been constant and genuine, careful and progressive, is the way Mr. Trimarchi choose to manage his company. He himself is low profile person, with a great deal of experience in the elevator industry, good business vision and foresight to avoid the ups and downs of the Argentina economy, which seem to be resolving.

They have the complete equipment of the elevator safeties (such as speed regulators, wedge boxes, bumpers, door mechanisms, valves, parachutes) in accordance with the requirements of Resolution Nº. 897 and have been approved by INTI.

The family expresses an infinite gratitude to their customers and suppliers for all the support provided over the years.

The first deposit visited consists of two floors that, exceeded by the amount of merchandise, made it difficult to take photographs. There you can find door mechanisms and operators of Fermator brand, of which they are representatives in the country.

They also have an electronic laboratory for the official proof and repair of Fermator operator plates. Just in front, it is the former H.Trimarchi headquarters, a warehouse of 18 meters with per 70 meters depth, which houses components for the installation of new elevators. There is a huge amount of guides Monteferro brand of all measures, guides of which they are exclusive representatives in the country as they also are of the Moris hydraulic equipment and traction machines G. Montanari for all capacities and speeds. Lots of hydraulic pistons are located against the walls and also in huge piles. Maneuvering controls of the following brands: Automac, Maclar, Microtec, Saitek and Wilcox, IPH steel cables, Coelpla electric cables, Dynatech instant and progressive wedge boxes, rescuers of Italian origin, hydraulic bumpers and other materials ready to be dispatched, steel frames for hydraulic elevators made by Trimarchi, racks and Fermator door operators. We move on and we come across speed regulators, pulleys, Gervall products, electronic barriers from Weco and packed cabins ready to go. On escalators they are distributors of SJEC brand.

From the beginning the company focused on manufacturing a variety of elements, but production increased in the last three years with the opening of a manufacturing plant in Echauri Street. At the moment is not possible to gather all the spaces of the company in a single site. They always look forward to that possibility and for that reason they gradually have been acquiring the places that were left vacant nearby.

The cabins, frames, and all the ironwork of the elevator is manufactured in this place, where you can see all the required machinery for cutting, bending, welding. For punching they have a modern water cutter, capable of crossing steel with a thickness of up to 150mm. The cabins they make are like standard Type 1 but in the majority of the cases they do it customized, as every building has different needs. A huge cabin for 2,000 kilos of cargo awaits its completion to be moved by the contractor to its destination in a leading laboratory in the city.

There also manufacture frames and sheets and glass doors of Cristal Total for the Fermator doors, following all the specifications of the Spanish company. In addition they have another headquarters where the leaves and the frames of the automatic doors are made, counting for it with punching and folding machines, and cabins of epoxi painting.

Spare parts retail sale and offices We arrived at the end of the tour, the site of the counter where installers and operators do their shopping and the administration offices. Where they offer a stock of 8000 different products, and deliver all kind of products from national manufacturers such as: Automac, Avaxon, Ballester, E. Company, Famac, H.A, MS Elevators Parts, MS Metalúrgica Sorrentino, among others. For so much traffic they have an efficient dispatching system to deliver the orders which come from interior. On the upper floor are the modern offices where the Trimarchi family receives the visit of the installers, where projects are developed, the dimensions of the elevators and their components are calculated. We entered the office of Sabrina Trimarchi, the woman who manages the 900 current accounts that H. Trimarchi attends. The brothers and dad pose around her for the picture.

Many years, many customers, many articles, 35 people dedicated to meet the trade’s demand, in a country where elevators have a great story to tell. 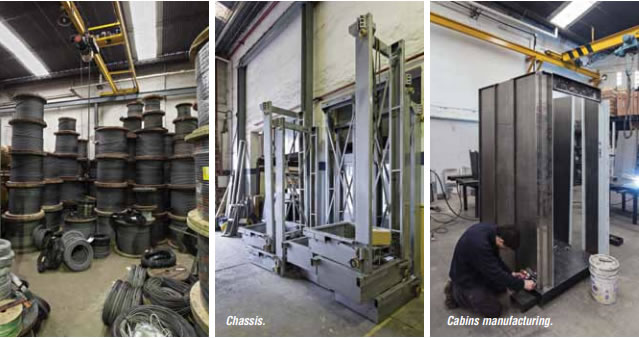 The market as seen by the Trimarchi family

“We cannot complain, says Mauro Trimarchi. The elevator market is a 70% of what it was seven years ago. We reach to 5000 elevators per year and now we are around 3500. The declines is more evident in CABA, while the interior keeps a steady pace. We ship materials throughout the country, and also Paraguay, Chile, Uruguay and Perú. We always send kits ready to be assembled, but separately, so that the package is not so big, sometimes in the works there is no comfort to handle a very large packaging “. 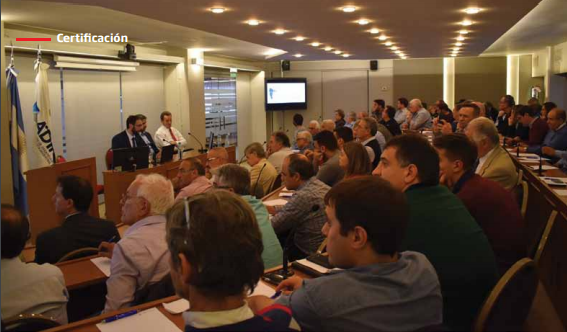