The company, which is attending its fortieth anniversary, has been over 40,000 manufactured controls, has doubled the volume of its plant three years ago and continues his way through his new generations.

It all started in 1978 when Eng. Carlos Sapienza along with his wife Beatriz Dajos founded the company; later on Eng. Horacio Venuto joined the company.

The current plant of 1500 m² is located in Lomas de Zamora and was built on a landscaped plot of 18.000 m². Three years ago, that area was multiplied by two by building a construction that doubled the area of manufacturing and tripled the one of offices, which include the administration, the commercial area and the R&D sector.

The plant lay out is still being completed and its development will continue towards the future.

There we met the full Sapienza family: Eng. Carlos Sapienza; Beatriz, his wife and children: Cecilia, Bachelor of Marketing and Martín, with a Degree in advertising. The ground floor has been greatly expanded, and there glazed screens will be placed in order to create new room for the Reception, Sales and Showrrom areas which will move there. The parking area will also be increased for visitors and a 3-stop elevator test tower will be erected to allow controls rehearsals and also to have a wide view of the area.

From the ground floor we set out on our tour around Automac with Carlos and Martín Sapienza.

A new training space has been created for some 25 people attending the technical courses offered by the company to its customers; also a new dining room for employees and a new laboratory. All spaces will be separated by glass laminates to share the light coming through the large windows along with the color of the jacarandaes and lapachos that blossom in spring and summer.

Telephone, computer and security networks are also being completed.

Finally, we arrived at the R&D offices where technicians and engineers Horacio Venuto, Silvio, Gustavo and Gabriel work on different projects. On the worktable we see touch keypads that are handled just like the screen of a cell phone, with new applications and designs, with a system of randomly changing, products that Silvio had begun to develop many years ago – he had been working in the company for three decades- which were presented in the First National Elevator Congress in 2009 at the UADE, but only now They find a place in the market.

Automac manufactures electronic controls, the classics A6220, A6300 and A6700, depending on the number of stops; car operating panels with exclusive and original buttons designs of all sorts including embossed buttons for Braille; all kind of indicators for the door lintel, color TFT screen position indicators, voice synthesizers; multi-beam barriers and a wide variety of accessories such as: load weighers, phase protectors, emergency lights and alarms, access controls, etc.

They were always intended to manufacture their components in Argentina, trying to import only the elements and supplies they were not able to produce in the country.

We go across the plant from one end to another, from where the process begins until we reach the products packed and ready for delivery. The lay out is also being renewed there, but still a great order and organization is observed.

We enter the so call Automac Kitchen, a glazed room, where Mr. Miguel is in charge of manufacturing electronic platelets in an Italian machine that takes all the SMD components with its robotic arm and sets them in a designated spot. The elements rest on that platelet that has a layer of tin paste. This whole system is called “pick and place”. The third step is the welding of these components to the plate, and to this end it goes to a melting oven that, at 235º melts the tin and ends the assembly process.

When they started 40 years ago, the components were larger and that task was made by hand. In this section the plates of the three lines of controls are manufactured plus those of the position indicators, the display screens and other electronic plates.

Next was the plates testing sector where one by one all the plates are examined before being sold.

On the way we met Jorge Montagut, an icon of Automac, working hard in the after- sales service and Bruno, in the service sector solving some damaged plate. Jorge visits the job site when a client has a technical issue or needs help starting up a control. He is the face of the after sales service. “There are 40.000 Automac controls installed and Jorge is here,” says Carlos Sapienza, which clearly shows that the controls are doing very well.

The large punching machine, with 32 work stations, is the one that prepares stainless steel for the car operating panels among other jobs. In each station it carries a male and female of a matrix to make cuts of different shapes up to 6 mm. of thickness. The thickness of the steel used is 2 mm, rare in the market for operating panels.

We pass through the section where the car operating panels and indicators are assembled and we find an industrial engineer measuring the time it takes an operator assembling an operating panel.

Another important core of Automac is the production office, where Sergio Venuto, among other technicians, is in charge of Automac’s new generation. Blueprints and technical documentation come from there, responding to the controls and signaling production orders. Each control and car operating panel have their own design since all or almost everything is customized due to the different demands that different buildings pose.

For those customers who want it, the car operating panels can be engraved with the logo they choose made by an Austrian laser machine, which could indicate the name of the elevator installation company, maximum capacity, building name or whatever.

Here and there, you can see in a neatly order boxes for alarms, emergency lights; inspection buttons that usually go on the roof of the cabin; infrared barriers with different number of beams for different uses, such as car lifts or passenger elevators.

We can see already perforated and folded panels to assemble the car operating panels, and those with anti-vandal buttons which support 2000 kg blows.

Automac has a well-earned reputation for accompaniment and after-sales service. One of the ways in which they make things easier for installers is with the pre-wired electrical installation (I.E.P.) service, that they prepare with a machine and cables specially manufactured for this purpose. In the aforementioned machine are all the cables and components necessary to make the electric installation in the hole, either the command cable, the pendant, which then go connected to the control, to each button and to each door. Juan Pablo Venuto, the other son of Horacio, deals with this specialty. A program is used that allows to calculate, according to the data brought by the installer, the cables that go to each of the floors, the meters with total accuracy, which allows the installer to have the installation kit and also save cable and save time.The kit is delivered with the correspondent installation plan.

This system was used in the Buenos Aires subways and also were prepared to prevent them from being destroyed by rodents, putting them inside sheet metal pipes and using zero halogen cables to avoid the emission of toxic gases in the event of a short circuit.

In the control test sector, the test benches have lifting platforms so technicians can work comfortably. All Automac equipment is tested by using an engine or machine. These tests are executed under full load. Several traction machines from different companies are seen in the plant to test the different controls manufactured for them.

Automac controls could be used in elevators that travel at a rate of 300 meters per minute, when the machines are suitable for these speeds, however, the installation company must comply with safety limitations. They are certified under IRAM 3681-5 and Mercosur standards and are registered in the City of Buenos Aires Government.

Automac is able to manufacture 300 monthly controls, controls that have a three years or two million trips guarantee, although there are some of them, which have been installed for almost 40 years, and they have only had some contactors changed. To the tradition control line they have added some others for MRL elevators, which are a bit higher and visibly thinner as they are housed next to the upper doors, outside the facilities.

Near the end of the tour we pass through the sector where the stock of heavier components, such as cabinets, transformers and cables, is housed. Close to there, the classic blue and orange Automac controls are piled up in their traditional models, those that always accompanied Revista del Ascensor, with their advertising, just from the very beginning, with enthusiasm and without pause, and for which we are eternally grateful, as well as for the illustrative notes that Eng. Sapienza used to publish in the magazine, 23 years ago, when the factory and the work keep him less busy.

Each control they manufacture has its serial number, the work number and its technical information, which is stored in a historical archive, in a yellowish and worn out folder, and of course, also, in digital archive. And all are there, since the work number one, after 40 years.

Not only because of the after sales service and the accompaniment Automac stands out. It is also because the importance they give to the human factor, that a good relationship has been created among the operators themselves and with the managers which is noticeable in their working way and in the smiles that show up when they pose for the final pic. 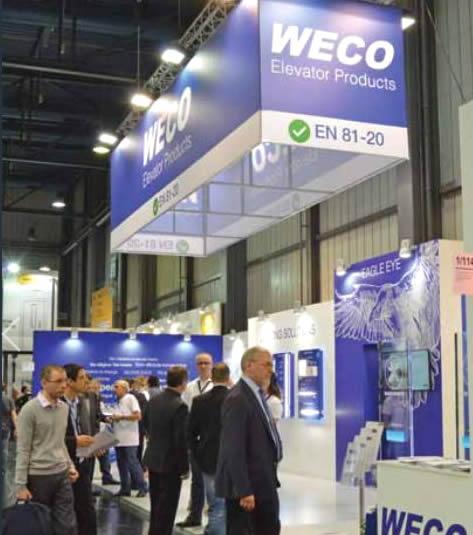